In Part 2 of my discussion on Genre painting in the 18th century I am going to continue with my discussion of William Hogarth , the great Genre Painter as well as painter of Portraits and Conversation pieces.

” The 1730’s were for Hogarth a decade of continual experimentation in new genres and extension  of those already attempted” [1].

” The 1740’s by that token were years of consolidation in which he sought to bring theory and practice together and thus win over the nation to an idea of an English School of Art”. [2].

Bindman now considers one of Hogarth’s famous series of conversation pieces which were used as prints or novellas. Marriage A La Mode.

” The elaborate setting should not detract however from the human tragedy which stems from the Marriage of Convenience. Hogarth creates an undercurrent of real emotion and feeling which transcends the comedy of manners”. [3].

” Hogarth continued to paint large scale biblical works when the opportunity arose ( Paul before Felix 1748) and they show signs of increased grasp and consolidation”. [4].

Bindman continues his appraisal of Hogarth by pointing out Hogarth’s other History painting Moses brought to pharaoh’s daughter.

” The other major History painting  of this period Moses brought to pharaoh’s daughter is notable for its warmth of feeling”. [5].

” Hogarth made portraits in most periods of his life and at certain times in the early 1740’s and at the end of his life he attempted to establish a regular practice”. [6].

Bindman makes reference to Hogarth’s painting of children which was interesting because if you observe the paintings they are a reflection of young adults.

” Hogarth’s painting of children almost represent a separate genre within his portraiture for their rare sympathy and freshness. They capture the seriousness yet they express subtly a number of distinctively 18th C notions that childhood is a transient state”. [7].

” The Graham Children are the definite account of 128th C childhood nothing in previous portraiture equals the subtlety with which Hogarth differentiates the ages and personalities of the Children”.[8]. 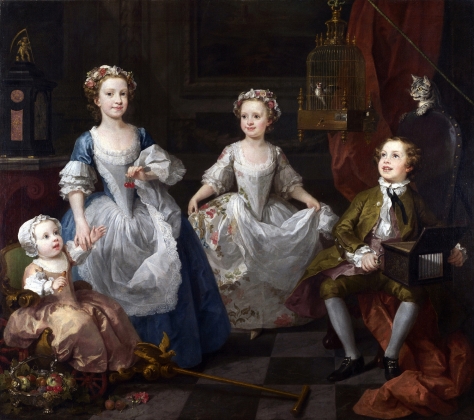 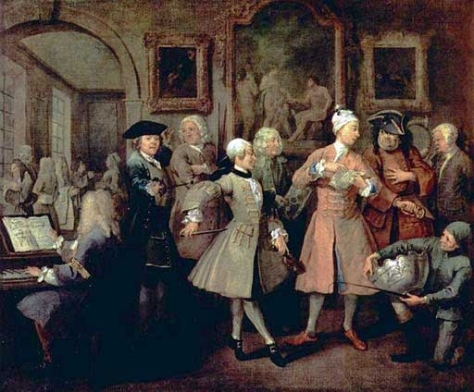 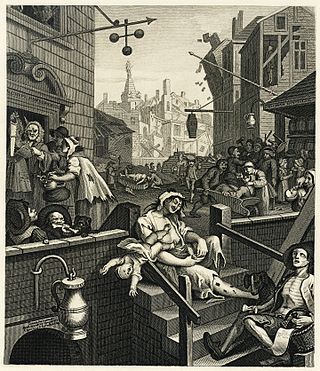 ” He (Hogarth) was conscious that much of his approach to Art was different from that of his contemporaries (Reynolds and Gainsborough) because he had in essence worked out for himself”. [9].

” His continued resistance to official Academies on the French model tended to isolate him from his fellow artists who saw them as a means to achieving professional status”. [10].

” Like Voltaire he felt that formal academies discouraged genius and he could point to the example of the French academy for confirmation”. [11].

” The essential qualities of Art he argued could only be acquired by observation , variety and character and expression came from nature and they were to be learned in a way that did not inhibit the imagination”. [12]. 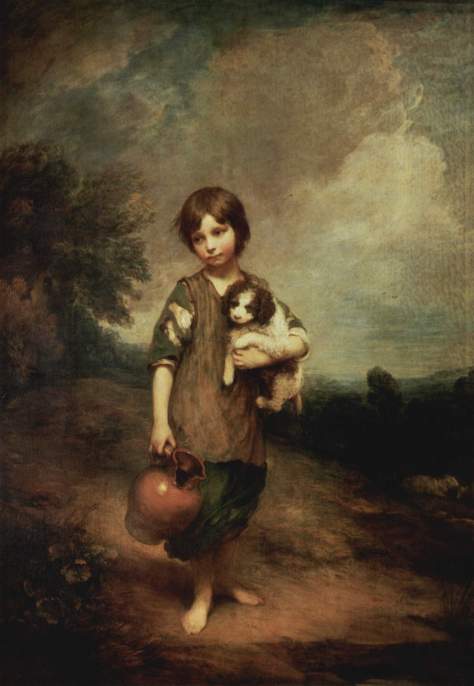 Bindman continues his discussion of Hogarth by suggesting that Hogarth believed Beauty was determined by Nature not by Art.

” Hogarth’s primary idea is that the true standard of Beauty is set by nature not by Art. The true connoisseur then must be a man of observation and not blinkered by Art alone”. [13].

” Hogarth’s target is the classical Idea that true Beauty is dependent on simplicity and the symmetry of the parts. He argues that simplicity is not a primary quality but one that may be required to temper excess”. [14].

Andrew Wilton in his book Five centuries of British painting from Holbein to Hodgkin suggests that Hogarth was concerned with telling stories in his conversation pieces which is quite true of course.

” Hogarth sought to tell extensive stories. He begins a tradition  that was to become characteristic in England. His scenes of everyday life are chapters of novels tracing the lives , rise and fall of types-The rake , The Harlot, the industrious and the Idle apprentices”. [15].

” The series Marriage a La Mode traces the tragic-comedy of a marriage of convenience which Bride and groom go their separate ways to destruction”. [16].

In his Concluding section Andrew Wilton considers Hogarth as a cheap purveyor of prints using his engraving skills.

” Hogarth realised that such works could never reach their market in their original form as Oil paintings. He had been trained as an Engraver initially on silver and had quickly entered the arena of popular satirical engravings which were much in demand”. [17].

” It was a natural step for him to translate his paintings into prints. He engraved his moral subjects and sold them by the thousands to a public newly eager for prints of all kinds”. [18].

This concludes the second part of my Exploration of the art of William Hogarth In future parts I will be concentrating on Thomas Gainsborough and Joshua Reynolds.