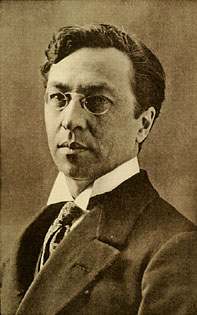 This is the concluding part of my series of articles on Expressionism . In this final article I will consider one of the most important exponents of Expressionism , The Russian Wassily Kandinsky. Paul wood a Marxist Art Historian considers the importance of Kandinsky in his seminal work ‘ The idea of an abstract Art’.

” One artist in particular sought to develop a fully abstract art from these practices of abstraction , from Nature the Russian Wassily Kandinsky who painted in Munich before the First World war”. [1].

” this was the time when Kandinsky organised the Blaue Reiter (Blue Rider) Exhibitions with his fellow-artists Franz Marc and published his influential Book ‘Concerning the spiritual in Art’. [2].

Kandinsky’s views on spiritualism and the Symbolist circles he moved in before the First world War were illusionistic , subjective and totally unreal and they had no real relation to the real materialist World. His Art in that sense was a rejection of realism and Materialist Art.

” In Munich in the 1900’s Kandinsky moved in a symbolist milieu. The aversion to Scientific Materialism that accompanied the Rhetoric of Symbolism stimulated an openness to Religion”. [3].

This was of course nonsense by Kandinsky. Frederich Engels the great Marxist  proved a long time ago in his Book Socialism Utopian and Scientific that it is only by practice in testing out our theories that we can approximate to truth.

” For his part Kandinsky was attracted to Theosophy . This was a Quasi-religious cult formed in 1875 by the Russian mystic Helena Petrovna Blavatsky”. [4]. 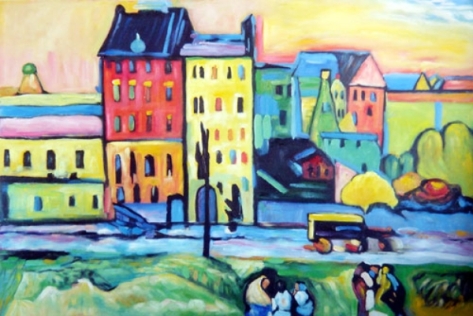 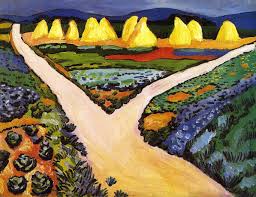 Wood continues his commentary pointing out that Kandinsky asserts that he had produced the first Abstract image.

” The dilemma Kandinsky felt was that if he completely abandoned represented subject matter in his search for an art of pure colour and Independent form he would merely succeed in creating works that have the appearance of a geometrical ornament”. [6].

Wood shows how Kandinsky voiced his concerns on his striving for pure abstraction.

” He feared that his Art , rather than achieving an elevated spiritual content would subside into mere decoration”. [7].

” The solution he came to around 1910-11 was to dissolve meaningful subjects in apparently abstract compositions”. [8]. 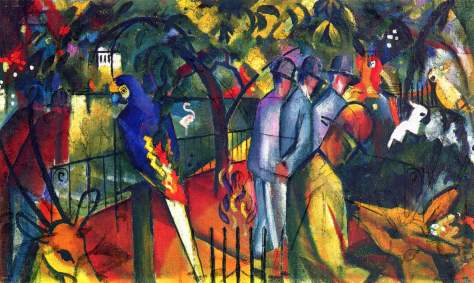 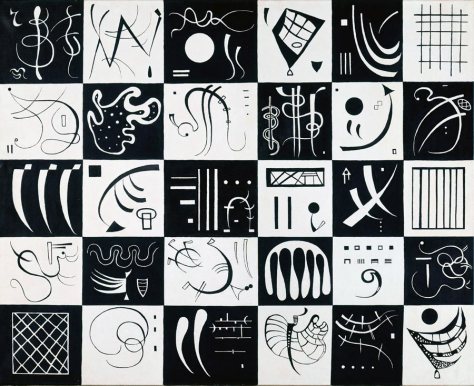 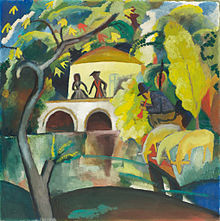 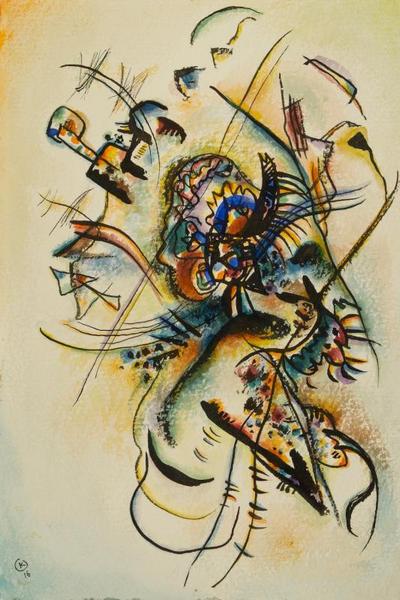 Wood shows how Kandinsky toyed with the idea of whether his images were fairy tales or subjects from mythology.

” On the other hand were the paintings a fairy tale or mythical subjects, often drawn from folklore and influenced by the Russian variant of symbolism”. [9].

” Another repertoire of images was drawn from the Book of revelation (A book of Fiction) and involved embracing couples , saints scenes of tempest and deluge and angels blowing the last trumpet on the day of judgement( Of course there is no last day of Judgement)”. [10].

Wood spends some time discussing what Composition iv represents Kandinsky painted a number of abstract watercolours in which he gave them a series of numbers after he had titled them Composition.

” Composition iv a large Oil painting from the same time may at first appear to be devoid of imagery, an informed reading of Kandinsky’s technical procedure and image repertoire shows otherwise”. [11].

” As to the meaning what we are to make of Composition iv. Kandinsky once commented that the Cossack image was prompted by an incident in the Russian revolution of 1905 ( Of course Kandinsky left Russia after the Bolsheviks took power and emigrated to Germany. Kandinsky was a notorious Anti-communist who after 1917 never worked there or returned). what it does probably suggest however is that the painting started life as an abstracted evocation of conflict , a state evoked rather than depicted by the properties of the lines and colours involved”.[12]. 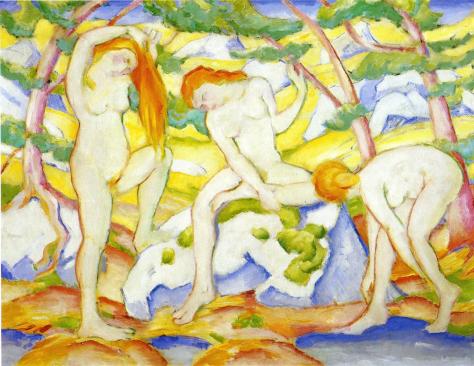 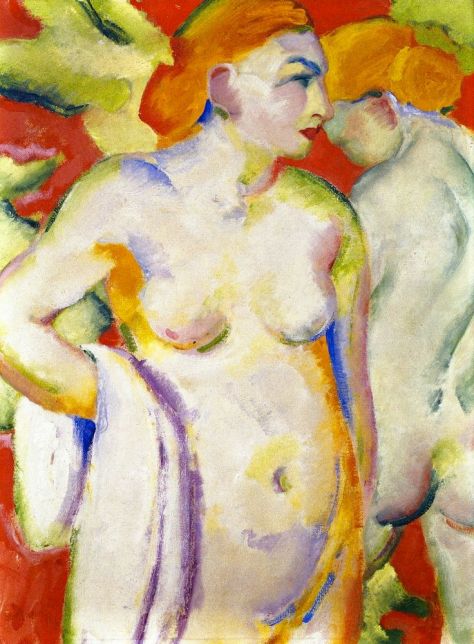 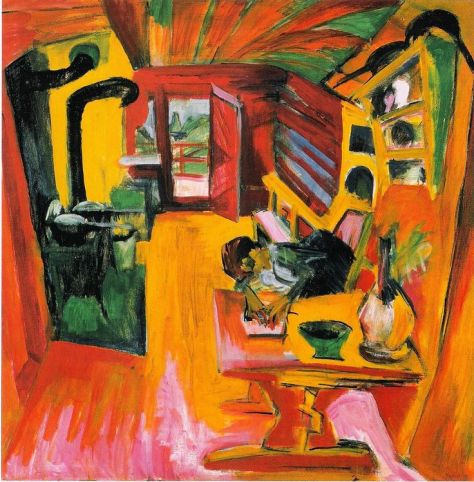 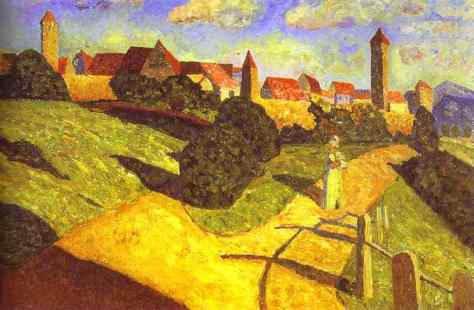 Wood continues  his discussion of Composition iv and the 7 others that Kandinsky  painted.

” That is to say Composition iv is working with a repertoire that draws on a register of themes to do with conflict -the Flood- Armageddon -judgement day and balances this with another evoking harmony , through suggestions of Paradise , the garden of eden , contemplation and repose”. [13].

This is certainly Idealism of the most subjective order and our Quasi-Marxist Wood falls in with the plot.

” Kandinsky painted 7 large compositions before the outbreak of the First Imperialist war. Over the period from 1910-14 the source images become more and more obscure until by Composition vii, the imagery is almost completely embedded in an overlaid by an abstract composition of apparently independent colours “. [14].

” The Expressive work is being done by the combination of lines , shapes and colours reinforced perhaps by hints of religious narrative”. [15].

This concludes my  investigation of Expressionism a Revolutionary art Movement in Germany at the beginning of the 20th Century . The originators of expressionism like Kirchner , Heckl and Rottluff had more to Offer than the increasingly Subjective idealist outpourings of Kandinsky’s art which was mystical and symbolic. Kirchner was definitely an outstanding representative of Expressionism which at times reflected the art of Post Impressionism and Cubism and the art of Vincent Van Gogh. My next post will be to investigate the early 18th Century British art of William Hogarth , Thomas Gainsborough and Joshua Reynolds.